Does anyone really care? 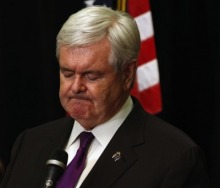 Newt Gingrich is out – well, mostly.  He announced that he would suspend his campaign and through his ginormous ego and support behind Mitt Romney.  Wait…is this the same Newt who vowed to stay in the Republican presidential contest right up to the national convention in late August?  Yes, the very same.  So the question is, why now?  Did Gingrich finally grasp the reality that his campaign shut down months ago?  Or was it something else?

Even in the end Gingrich couldn’t help but pat himself on the back and boost his ego.   It seems that Newt's entire run at the presidency was simply a way to increase his own self perception.  But, in the end, somebody still has to pay for it.  Gingrich is now over four million dollars in debt and it only gets bigger the longer he stays in the race.  As a result, suspending his campaign allows Newt to continue to raise funds to help pay this debt.  Furthermore, Gingrich will most likely seek financial assistance from Romney and the Republican National Committee.  So, to the victor (Romney) does not come the spoils of war, but the rising debt of it.

With his suspension speech, Gingrich sort of endorsed Mitt Romney.  Of course, if he is asking for money, he needs to at least act like he would back Romney.  Yet, Newt couldn’t help but remind voters why he is better than any of them.  And, Newt volunteered his great expertise and personality to the cause of defeating President Obama.  I’m sure that Romney is grateful for Newt being so willing to lend his support.  But in reality, I think that most would rather Newt Gingrich would just go away for a while.


The CEO that America Needs


On strike against work

END_OF_DOCUMENT_TOKEN_TO_BE_REPLACED

Should We Adopt Shorter Work Weeks?
Pelosi Ripped A New One
Save Medicaid
Actions To Take In Under A Minute
Take Action Today
How The French Strike
Pelosi Dangles Articles Of Impeachment
LGBTQ-Free Zones in Poland
Live Impeachment Discussion
Impeaching 45
Brits Think Our Healthcare Is Outrageous
Kamala Harris Drops Out